All Eyes On Kenya: The Next Big Oil Exporter

All Eyes On Kenya: The Next Big Oil Exporter 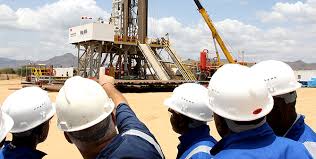 Not even the specter of a spillover of Islamic extremism from Somalia can dampen the atmosphere in Kenya, where commercial oil production is expected to begin in 2016 and discovery after discovery has made this the hottest and fastest-paced hydrocarbon scene on the continent.

When it comes to new oil and gas frontiers, today it’s all about Africa. And more specifically, it’s all about the eastern coast, with Kenya the clear darling–not just because it’s outpacing neighboring Uganda by leaps and bounds, but also because despite some political instability hiccups and the threat of militant al-Shabaab, it’s still one of the safest venues in the region.

Six of the last 10 biggest finds have been in Africa, where—all told–there are some 130 billion barrels of crude oil waiting to be tapped by more than 500 companies, according to a recent report by PriceWaterhouseCoopers.

Topping this list are Kenya’s Anza and South Lokichar basins where the discovery and development news has been fast-paced.

Earlier this year, in May, Tullow and partner Africa Oil Corporation left a hefty impression on the market with the announcement of the country’s first commercial oil discovery, worth $10 billion, in this basin.

And the next testing ground will be the neighboring Kerio Basin, which should get off the ground later this month, while there has been a flurry of attention lately surrounding the Ogaden basin where initial estimates are enough to send stocks soaring.

In the meantime, while bigger players such as Tullow and Africa Oil have benefited from the fame of their initial discoveries, they have also become burdened by the pressure of rising expectations for more discoveries. Not so the smaller players on this scene, who stand to benefit from the original discoveries and continued drilling—without the pressure. Investors will now be looking at who is poised to make the next discovery.

Africa Oil and Marathon are currently drilling an appraisal well on the Sala gas discovery in the Anza Graben Basin onshore Kenya, which will benefit other explorers with acreage just south of this, including UK-listed Afren Plc, UK-listed Tower Resources and Taipan Resources Inc, which has two onshore blocks in key basins. If these explorers come up with their own first find, it will be a superior risk-reward scenario.

In the Ogaden Basin, the market will certainly take notice of Afren’s new estimates late last month that a large under-explored sub-basin, El Wak, contains up to 6.65 billion barrels of oil. If this estimate is accurate—and it comes in well above partner Taipan Resources’ earlier estimates of about a quarter of that—they would be looking at the largest onshore target ever drilled anywhere in Africa. Later this year, Afren will be conducting seismic surveys to further define El Wak’s potential, and investors will be watching closely.

Related: This Under-Developed Coast is Energy’s Next Thing

The bigger picture, though, is of an East African country that has the advantage over its neighbors due to a convergence of add-on factors, including infrastructure aims, relative stability and what appears to be a smarter use of natural resources to generate more investment and economic growth, according to Jennifer Cooke of the Center for Strategic and International Studies.

Among other planned infrastructure projects of a massive scale, discussions are under way for a pipeline from neighboring Uganda, which would pass through the South Lokichar basin and come close enough to some of the prime drilling areas that could be the site of Kenya’s next discoveries.

The World Bank’s approval in July of $50 million for the Kenyan government to boost its management and distribution of natural resource revenues, with an eye on long-term sustainable growth, has provided further confidence for developments in the region.

In the meantime, political stability has also been given a slight reprieve with the International Criminal Court’s (ICC) indefinite adjournment of the trial against Kenyan President Uhuru Kenyatta due to lack of evidence that he organized post-election ethnic violence in 2007.

But the security situation with the regrouping of the Somalia-based al-Shabaab militant group and an uptick of the group’s apparent attacks on Kenya continue to be problematic, even more so because no one seems to be sure whether the threat is emanating entirely from al-Shabaab.

While this remains a clear threat, it has not affected exploration and development—and it certainly has done little to scare foreign investors from this hydrocarbon frenzy that is expected to continue over the next five years, further boosted by relatively cheap exploration licenses.

In this race, Kenya is the top contender, moving forward at double the speed of neighboring Uganda which discovered oil in 2006, six years before Kenya, but will lag a year behind the newcomer in terms of commercial production.

By James Stafford of Oilprice.com